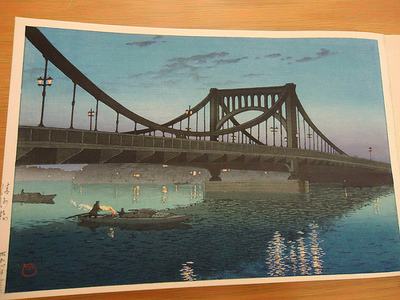 A 1931 print of Tokyo's Kiyosu Bridge, as seen in a process book depicting the process of building up an image one woodblock at a time. Separate blocks were used for each color in a composition, for creating layering effects, and other effects and designs.

Kawase Hasui is among the most famous of the shin-hanga woodblock print artists. He was recruited by publisher Watanabe Shôzaburô in 1918, and, employing a combination of traditional and modern (Western) techniques and materials, he designed countless landscape scenes imbued with the romance of a "traditional" Japan.

Born and raised in Tokyo, Kawase Bunjirô later took on the art-name "Hasui." He trained in Nihonga painting under Araki Kan'yû and Aoyanagi Bakusen, and in Western painting (yôga) with the White Horse Society Aoibashi, before becoming a disciple of Kaburaki Kiyokata. In 1918 he received his first commission from Watanabe Shôzaburô's company - three pieces. He remained associated with Watanabe's firm throughout a lengthy career, but many scholars feel that his best work was produced between 1918 and 1923.[1]