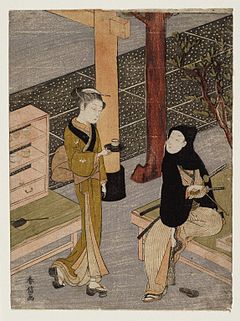 One of the more famous depictions of Kasamori Osen, serving a man who has been variously identified as a samurai, on account of his swords, or a kabuki actor merely dressed as a samurai. Ukiyo-e woodblock print by Suzuki Harunobu, c. 1768-69. Brooklyn Museum.

Kasamori Osen was a waitress at the Kagiya teashop near Kasamori Inari Shrine in Yanaka, a neighborhood of Edo; the shop was owned by her father, Kagiya Gohei. Osen was made famous as a local beauty by a number of ukiyo-e artists of the time, Suzuki Harunobu first among them, who took her as the subject of their prints.

Along with Ofuji of the Hon'yanagi toothpick shop and Oyoshi of the Tsutaya teahouse, she was apparently categorized as one of "The Three Beauties" in at least one publication of the times (the 1779 Ameuri Dohei-den by Ôta Nampô, who had also mentioned her in a work nine years earlier). Over time, her fame grew, and she appeared not only in single-sheet prints, but also in woodblock printed books, kabuki plays such as "Kaidan tsuki Kasamori"[1], and in doll form.[2] Some Nihonga painters, such as Masuda Gyokujo, even painted her in the 20th century, harkening back to Harunobu.

Around age 17-19 when she was being painted by Harunobu, beginning in 1770/2, when she was 19, she disappeared from public view, and only her father was seen at the teashop. It is said many wondered what had happened to her and worried; she had married Kurachi Masanosuke, a oniwaban (shogunate guard or spy), and had become sequestered away from public life, living in a mansion at the Sakuradamon for the rest of her long and, it is said, happy life.[3]