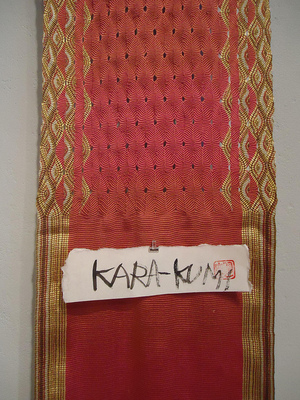 Karakumi is a braiding technique introduced to Japan during the Asuka period (early Tang Dynasty), and used in the Nara and Heian courts, but largely lost after that. It is described as involving the most complicated thread movements in traditional textile-making, in which warp becomes weft and weft becomes warp, over and over again.

The technique, incidentally similar to one employed by the Inca civilization, was used to make a variety of materials, including hirao sashes by which courtiers wore ceremonial swords.

Today, the technique is used only in conjunction with the reconstruction of Ise Shrine, once every twenty years; hirao sashes are worn during the associated ceremonies.

However, expert craftsmen such as Izukura Akihiko have in recent years worked to research and recreate the technique. Izukura calls his recreation of the technique jizai (自在) cloth.