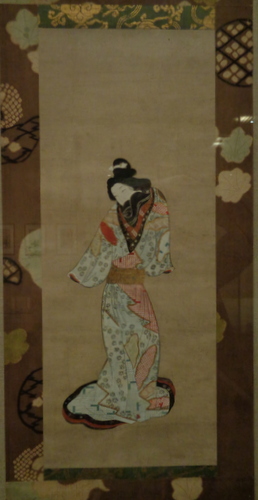 A Kanbun bijin by the Kanbun Master, on display at the Metropolitan Museum

The Kanbun Master was one of the earliest pioneers in the woodblock print art style which would later come to be known as ukiyo-e. Nothing is known about his personal life, birth and death dates, or even his name; scholars have thus come to call him simply "the Kanbun Master", after the imperial era of Kanbun during which most of his works were produced.[1]

The Kanbun Master produced chiefly book illustrations for sex manuals and courtesan critiques, his style exerting a profound influence on Hishikawa Moronobu, sometimes called the "father of ukiyo-e", who was chiefly active a decade later.