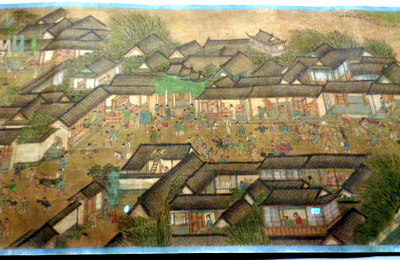 A section of the city as seen in a detail from a Qing dynasty copy of "Along the River on the Qingming Festival," by Zhang Zeduan

Kaifeng is a city in northern China, which served as Imperial capital in various periods of Chinese history, most prominently during the Northern Song Dynasty.

One of the small, early, states which took Kaifeng as its capital was the Liang Dynasty (907-923), one of the Five Dynasties and Ten Kingdoms which emerged in the aftermath of the fall of the Tang Dynasty.

During the Northern Song Dynasty, the city was known as Baijing. In the late years of the Northern Song, the city, roughly 60 km2 in area, housed over one million people - a larger population than London would see until five hundred years later. Unlike in the earlier capital of Chang'an, in Kaifeng there was no citywide curfew, and the pleasure quarters (for example), along with many restaurants, remained open all night.[1] Also unlike Chang'an, Kaifeng was not centrally planned, but grew organically, containing at its height a lively interplay of government offices, shipyards, restaurants and teahouses, garrisons, warehouses, textile businesses, Chinese medicine shops, and lumberyards, among many other types of shops, as well as, of course, extensive residential areas.[2] The first Jewish synagogue in China was established in Kaifeng in 1163; it remained the only synagogue in the country until the 19th century.[3]

Baijing fell to invasion from the Jurchen Jin Dynasty in 1127; the Jurchens surrounded the city and took prisoner Emperor Huizong, along with much of the Imperial family. Kaifeng was then controlled by the Jin for over a hundred years, from 1127 until the Jin fell to the Mongols in 1234. It would remain under Mongol control until the establishment of the Ming Dynasty in 1368.