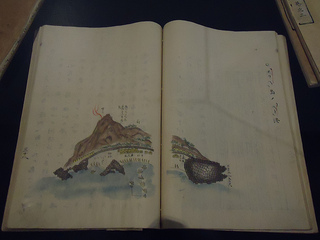 A page from Bantan, Jirôkichi's account of his travels, on display at the Bishop Museum in Honolulu

Jirôkichi was an Edo period sailor who became marooned, and traveled to Hawaii, Kamchatka, and Alaska before being returned to Japan. He recorded aspects of his journey in the book Bantan (蕃譚, "Barbarian Stories").

Jirôkichi was a crewman on the Chôjamaru of Etchû province. In 1838, he became shipwrecked off of Sendai; six months later, he was picked up by an American whaling ship, and brought to Hawaii. He and his compatriots may have been the first Japanese in Hawaii; they are, at least, the first of whom historians are aware. Jirôkichi and two of his companions then lived with the family of Gerrit Judd in Honolulu until 1840; the fates of the other four are unknown. Jirôkichi later traveled through Alaska, Kamchatka, and Iturup (J: Etorofu) before returning to Japan proper in 1843. Detained in Edo, he was eventually allowed to return to his village, where, with the help of Koga Kin'ichirô, he wrote Bantan, an account of his travels, complete with numerous color illustrations. It is the first Japanese account of the land and people of Hawaii.