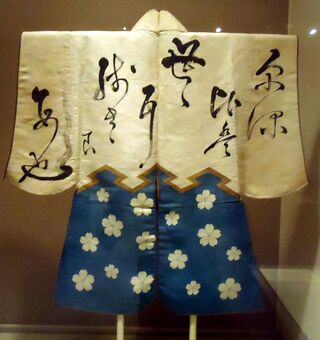 A late 18th or early 19th century jinbaori featuring a sakura motif, and calligraphy of a poem which can be translated as: "After bursting into bloom / Flowers soon scatter / But their sweet-scented / Fragrance will linger / Generation after generation."

Jinbaori (military camp haori) are a style of surcoat typically worn over armor.

Originally a rather simple jacket worn over armor as a protection against the weather, jinbaori evolved over the course of the Sengoku period into far more elaborate garments, decorated with various motifs as an expression of the wearer's wealth, power, and aesthetic taste.

Some came to be made of wool obtained by daimyô from Europeans, either as tribute or by trade. This resulted in jinbaori which were relatively water-resistant and warm, a great convenience for wintry or inclement weather.[1]