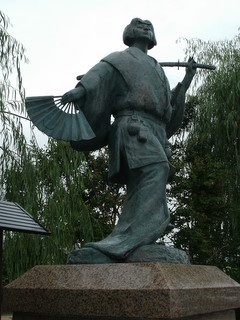 Statue of Okuni at Shijô-Kawaramachi, in Kyoto.

Izumo no Okuni is said to be the founder of kabuki theatre. Very little is known about her. The kabuki form is said to have evolved out of song-dance performances she organized on temporary stages on the shores or dry riverbed of the Kamo River in Kyoto.

Okuni is often said to have been a miko (shrine maiden) from Izumo Taisha in what is today Shimane prefecture, but her true origins are unclear. Historian Amino Yoshihiko suggests that through the end of the medieval period, traveling performers were nominally closely associated with shrines; it is possible that Okuni was considered a miko and/or associated with Izumo Taisha in this respect, even if she was not actually trained or active as a shrine maiden.[1]

Her performance troupe consisted chiefly of prostitutes, and the performance essentially served as advertising; viewers could approach Okuni, or the dancing girls, after the show to proposition them. Okuni is also closely associated with the phenomenon of the kabukimono - street toughs who dressed in bizarre clothing (including cross-dressing), and who were described as people (者, mono) who "leaned" (傾く, kabuku) away from the normal. Okuni is often said to have dressed as a man, and to have worn Christian rosaries, or a Christian cross on a necklace, not as an article of faith, but as an element of her eccentric fashion sense.

The first "kabuki" performance is said to have taken place on the dry riverbed of the Kamo River, near Shijô-Ôhashi (the Great Bridge at Shijô Avenue, in Kyoto), in the fourth month of 1603. She also organized or led performances on the Noh stage at Kitano Tenmangû, and led her troupe on tours. "Okuni Kabuki," as it is called, generally focused on dances, and on very limited, loose plots. Rather than dramatic or comedic plays, these performances might be better described as skits or sketches, along with pure dance pieces. Though kabuki would go on to be considered a popular or commoner-level theatrical form throughout the Edo period, as early as 1607, only four years after the supposed origins or debut of kabuki, Okuni and her troupe performed at Edo castle.

Kabuki as performed by women was banned by the shogunate in 1629, mainly because of the association with prostitution. From then on, and still today, traditional/professional kabuki performances feature only male actors, playing both male and female roles.

Okuni is often said to have been involved romantically with the samurai Nagoya Sansaburô, who is often described as playing a significant role in the creation of kabuki. However, there is little historical evidence that he in fact ever met Okuni, let alone was romantically involved with her. Much of what is known about the two figures, and their relationship, comes from fictionalized or dramatized stories, as seen in stage productions and popular publications.

Okuni is buried at Kôtô-in, a sub-temple of Daitoku-ji, in northern Kyoto, as is Nagoya Sansaburô.