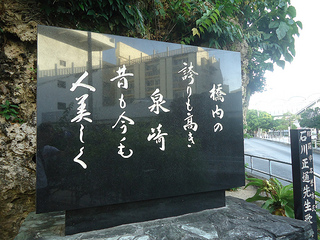 A stone bearing a poem by Ishikawa, at Nakashima in Naha

Ishikawa Seitsû was an Okinawan scholar of English literature. Among his works were translations of the full stories of Sherlock Holmes.

Born in Okinawa in 1897, he learned English from a Christian minister. After graduating from Tôhoku University, he taught at Japan Girls' Academy (Nihon joshi kôtô gakuin)[1], among other institutions, and after the war, at Juntendô University and Kokushikan University. He also served as translator and interpreter at the Tokyo War Crimes trials.