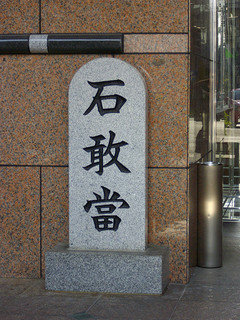 One of many ishigantô in Naha.

Ishigantô are stones erected at intersections and inscribed with the characters 「石・敢・當」 (ishi, gan, tô)[1] as a charm against evil spirits. The practice started in China, and spread to Japan via Ryûkyû; today, ishigantô can be found as far north as Aomori prefecture, though they are by far the most numerous in Okinawa and Kagoshima prefectures.

Some accounts relate that the earliest ishigantô was erected by a governor of a district within Fujian province in the year 770, but the true origins of the practice are unclear.