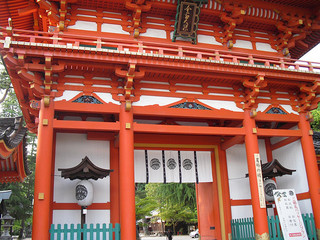 The gates to Imamiya Shrine.

Imamiya Shrine is a Shinto shrine in Kyoto, founded in 994.

It enshrines three goddesses, who were often prayed to to avoid or end plague. Emperor Ichijô was among those who prayed here for protection from the plague, doing so for the first time in 1001/5. The Honden (main hall) which stands today is a 1902 reconstruction, though the small shrine to the west of it is said to have stood from long before. Thus, the name Imamiya (Shrine of Now) came to be applied to the newer shrine built next to or around the older small shrine to the west.

The shrine grounds include an Inari shrine known as Murasakino Inari.

Yasurai Matsuri, held at Imamiya Shrine on the second Sunday of April, when the sakura are in bloom, is one of the chief festivals of Kyoto, and originally was meant to help ward off disease.