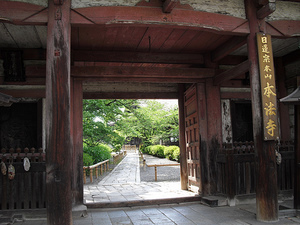 The entrance path into Honpô-ji as seen through the temple's gates.

The temple was burned down shortly afterwards, after Nisshin invited the displeasure and ire of Shogun Ashikaga Yoshinori, who had it destroyed. A new hondô was built in 1455 near Shijô-Takakura, on land granted by Emperor Go-Hanazono. The temple was moved in 1460 to Sanjô-Madenokôji, and again sometime around 1532-1555 to the site of what is today Seimei Shrine, near Ichijô-Modoribashi.

In 1587, Honpô-ji was one of many temples which were relocated as part of Toyotomi Hideyoshi's reconstruction and reorganization of the city. It was re-established at its current location at that time. The temple's tenth abbot, Nittsû shônin, was given 1000 koku of temple lands, and Hon'ami Kôji , swordsmith and father of artist Hon'ami Kôetsu (1558-1637), donated funds for the reconstruction of the temple's halls and grounds.

Honpô-ji thus became the family temple of the Hon'ami family, though Kôetsu himself is buried elsewhere, at Kôetsu-ji, a temple he founded in 1615. The abbot's quarters (hôjô) at Honpô-ji boasts a garden said to have been designed by Kôetsu, and the temple owns many paintings by Kôetsu and Hasegawa Tôhaku, among others. The garden, roughly 600 square meters in size, sits to the east of the shoin (study), extending around to the south, and is said to combine the feeling of a Muromachi karesansui (rock garden) garden with that of the later Azuchi-Momoyama period garden which evokes a sense of "breath." Nationally designated as a site of scenic beauty (国指定名勝), the garden includes a lotus pond, and an arrangement of rocks meant to resemble a waterfall.

Honpô-ji burned down almost completely in the Great Tenmei Fire which ravaged the city in 1788, the storehouses alone surviving, but the temple was rebuilt, and most or all of its structures today date back to that time.