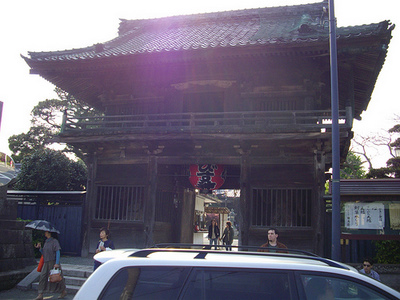 The main gate to Hongaku-ji.

The temple features an Ebisu-dô (Ebisu Hall) which is counted among the Seven Lucky Gods of Kamakura. The Ebisu-dô was originally built on this site as part of a Tendai Buddhist temple established in the late 12th century by Minamoto no Yoritomo, in order to defend Kamakura to the unlucky northeastern direction. Nichiren himself stayed here for a time in 1274, using it as a base from which to preach his teachings, following his return from exile on Sado Island.

The temple also boasts part of the relics of Nichiren, as well as the grave of the great swordsmith Masamune. The main object of worship is a Shaka Triad.