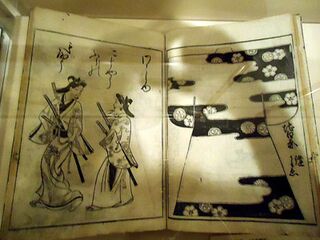 Hinagata, or Hinagata-bon, were pattern books produced and sold in the Edo period which depicted fabric designs which readers could then order from textile merchants, either in the form of bolts of cloth, or as ready-to-wear garments.

The first such book, On Hinagata, was published in 1666 and contained patterns for two hundred kosode kimono. It was very quickly followed by the publication of numerous similar volumes. These pattern books advertised new dyeing, printing, and other textile decoration techniques, as well as new patterns, styles, and fashions, which one could then buy. They quickly came to be used not only by consumers, but by producers, to know what their competitors were selling, and what was popular or fashionable, guiding the producers' own designs.

Scholar Eiko Ikegami identifies these hinagata-bon ("hinagata books") as "mark[ing] the birth of popular interest in fashion and the rise of a lucrative fashion industry."[1]