Tale of the Heike

From SamuraiWiki
(Redirected from Heike Monogatari)
Jump to navigationJump to search 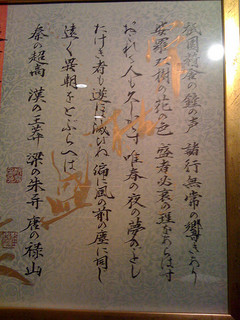 Calligraphy by a contemporary artist, of the famous opening lines of the Tale of the Heike:
祇園精舎の鐘の聲、諸行無常の響あり。娑羅雙樹の花の色、盛者必衰のことわりをあらはす。おごれる人も久しからず、唯春の夜の夢のごとし。たけき者も遂にほろびぬ、偏に風の前の塵に同じ。

Gion shôja no kane no koe, shogyô mujô no hibiki ari. Shara sôju no hana no iro, shôsha hissui no koto wari wo arawasu. Ogoreru hito mo hisashikarazu, tada haru no yoru no yume no gotoshi. Takeki mono mo tsui ni horobinu, hitoe ni kaze no mae no akuta ni onaji.
The sound of the Gion Shôja temple bells echoes the impermanence of all things; the color of the sala flowers reveals the truth that to flourish is to fall. The proud do not endure; the mighty fall at last, to be no more than dust before the wind.

The Tale of the Heike, or Heike monogatari, is among the most famous of the gunki monogatari epic "war tales." Developed out of oral traditions, and in particular the storytelling tradition of the traveling biwa hôshi, the Tale is extant today in a number of differing written versions, ranging in length and style, many of them with variant titles and varying content, ranging as well in date, from the 13th century through today. In general, however, the Tale relates a dramatized, fictionalized, account of the fall of the Taira clan in the late 12th century, with much of the text describing the events of the Genpei War.

Whatever its origin, all extant versions of the tale seem to be related to, or derived from, one another; multiple versions are known to have been in circulation by the end of the 13th century, but if any dramatically differing versions existed, they are not extant today. The versions today considered most typical, or most characteristic, are of middling length, date to the 14th-15th centuries, and are records of versions related orally by the biwa hôshi performers. The version perhaps most widely considered standard is that derived from one recorded by a biwa hôshi named Kakuichi in 1371; generations of biwa hôshi memorized and recited Kakuichi's version of the tale, passing it down through the tradition. This version of the tale, known as the Kakuichi-bon ("Kakuichi Book" or "Kakuichi Text") has also been used as the basis for many modern translations. Important early variant texts which survive include what are called the Engyôbon version, and the 48-chapter Genpei jôsuiki ("Tale of the Rise and Fall of Minamoto and Taira"), which was previously considered an independent work but is now considered a variant version of the Heike itself.[1]

The Engyôbon is dated "Enkei 2" within the text itself, a date corresponding to 1309 or 1310 on the Western calendar; however, the earliest extant copy of this text dates only to 1419, and it is unclear how much it may differ from the "original" 1309-10 text. Representative of a read lineage, passed down as texts to be read, it contains more episodes on the founding of temples and shrines, more anecdotes from Chinese history, and more thorough battle descriptions than the oral performance tradition. In contrast, the performed tradition, represented by the Kakuichibon, and more dominant today, contains fewer digressions from the main thread of the narrative. The Kakuichibon, interestingly, ends twice. It contains twelve chapters, each consisting of numerous episodes, with the last chapter ending with the death of Taira no Takakiyo, also known as Rokudai. This is followed by a colophon, which translates roughly as "Taken down by Yûa, a disciple of the Buddha, on Ôan 3 (1370), 11th month, 29th day. This, however, is then followed by what is known as the Kanjô no maki, an additional section of several episodes describing the life of Kenreimon'in (daughter of Taira no Kiyomori, mother of Emperor Antoku) after the end of the Genpei War. These sections, today widely taken as the standard ending in modern reprintings and translations, are then followed in the original Kakuichibon text by a second colophon, this one written by Kakuichi and dated several months later (1371/3/15), in which he explains that this text represents the complete and secret teachings of his tradition, so as to preserve for his disciples the correct form of the narrative, and to avoid disagreements between them. He specifies that it is to be seen, and copied, only by his direct disciples, and their disciples, and that anyone who shares it, and anyone outside of his lineage who reads it, should suffer divine punishment.[2]

The Genpei jôsuiki, meanwhile, also dates to the 15th century, and while it is by no means the dominant version of the Tale today, it is of great significance as the source on which many Noh, jôruri, and kabuki plays, as well as other literary and theatrical pieces, were based. At 48 chapters, it is also the longest version of the Heike, including many episodes absent from other versions.[2]

In the biwa hôshi tradition, performers would often perform only individual episodes, but sometimes too they would perform the entire Tale over the course of several days. This was often done by a single performer, or by two, who alternated episodes. The latter was known as zure Heike. Eventually, Heike performers formed into a guild, known as the Tôdô-za. The Tôdô-kaikan (Tôdô Meeting Hall, or Association Hall) can still be found today in Kyoto, and is home to a stone statue of Kakuichi, among others. While these biwa hôshi were traditionally blind, a sighted performance tradition emerged by the 18th century. The Heike mabushi (平家正節), dating to 1776, is an extensive collection of Heike texts accompanied by chanting notation. The episodes within these books are arranged not in chronological narrative order, but rather in the order of popularity, and of training in the repertoire; thus, one could practice and learn to perform only the first book, and thus become proficient in all the most popular episodes. Once one made one's way through all the books, there were additional "secret teachings," including lesser secret pieces entitled Gion shôja and Engi seidai ("the divine period of the Engi reign"), and greater secret pieces including the Tsurugi no maki ("chapter of the swords"), Kagami no maki ("chapter of the mirrors"), Kanjô no maki, and Shûron ("Doctrinal Debates").[2]

Though the biwa hôshi tradition declined after the Ônin War (1467-1477), eclipsed by other performance forms, the Heike has remained extremely prominent in Japanese traditional performing arts, and literature. The majority of Noh plays in the category of "warrior plays" are based on episodes from the Heike, as are the majority of extant kôwakamai ballads, and numerous jôruri puppet plays and kabuki plays, as well as contemporary novels and NHK Taiga drama television programs.