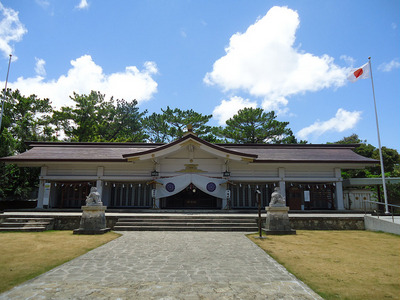 The main hall of Gokoku Shrine

Gokoku Shrine is a Shinto shrine in Ônoyama Park, Naha, Okinawa prefecture, dedicated to the spirits of those killed in war. Though established originally, and still operated today, as a Japanese Shinto shrine, the grounds contain numerous altars or sacred spots (utaki) associated with the indigenous Ryukyuan religion.

The shrine was first established in 1936 as a shôkonsha (a shrine dedicated to the spirits of the war dead), and was renamed Gokoku Shrine ("shrine for the protection of the nation") three years later. It was officially designated as one of Japan's many "Protection of the Nation Shrines" by the Minister of the Interior in July 1940, and was renovated and expanded over the next several years. The shrine is dedicated to the spirits of Okinawan soldiers who died in the wars of the Meiji and Shôwa periods, Japanese soldiers who died in Okinawa, and Okinawan civilians who died in the Battle of Okinawa.

Much of the shrine was destroyed in the 1945 Battle of Okinawa, with the haiden (main worship hall) as the only major building to survive. Portions of the shrine grounds then began to be shared with a school, but after popular sentiment grew desiring a central place to pray for the spirits of the dead, the shrine was officially re-established in 1959, funded by mass donations from across Okinawa prefecture. Later that year, the spirits of soldiers who died in the Battle of Okinawa were officially split off from Yasukuni Shrine and were brought to Okinawa's Gokoku Shrine. The shrine then began to be rebuilt, and re-expanded.