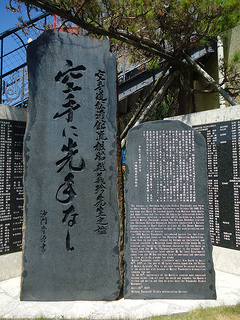 Monument to Funakoshi Gichin at Gokoku Shrine in Naha

Funakoshi Gichin, also known as Shôtô, was the founder of Shôtôkan karate, and is credited with introducing the writing of 'karate with characters meaning "empty hand" (空手), rather than the previous form, meaning "China hand" (唐手).

Born in Shuri, the capital of the Ryûkyû Kingdom, in 1868, he practiced karate under Itosu Ankô and Asato Ankô, as well as interacting with other karate experts and others over the course of more than thirty years while working as a school teacher. He established the Okinawa Shôbukai (Association of Shô martial arts), participated in the Okinawa Karate Research Society, and oversaw a karate demonstration performed before the Shôwa Emperor.

Beginning in 1922, Funakoshi journeyed to mainland Japan and worked to introduce karate there, writing books and giving lectures and demonstrations.

A monument was erected to his memory just outside Gokoku Shrine in Naha, in 2007, by the Okinawa Funakoshi Gichin Appreciation Society.