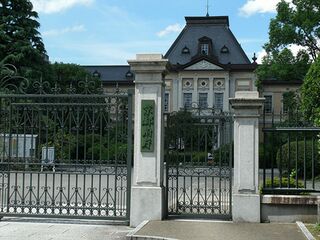 The gates to the Kyoto Prefectural Headquarters complex, with the former headquarters in the background

The former headquarters of the Kyoto prefectural government is a Neo-Renaissance building located at the Shinmachi-Shimotachiuri intersection in Kyoto, a few blocks west of the Kyoto Imperial Palace. Built in 1904, it is the oldest government administration office building still in use, and has been designated an Important Cultural Property.