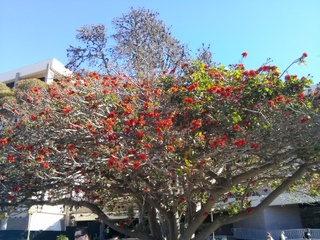 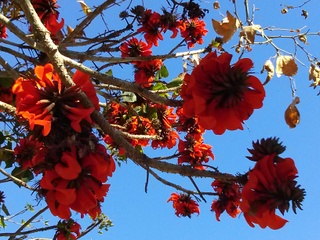 The flowers of that coral tree.

The deigo (O: diigu) is a flowering tree, designated in the early postwar period as the official flower of Okinawa prefecture.

Originally from India, the tree blooms bright red flowers in the early summer, which in Okinawa comes in February, March or April. Much as plum blossoms are in mainland Japan a classic symbol of the ending of winter and the coming of spring, deigo came to symbolize in Okinawa the beginning of summer.

The blossoming of the deigo was thus also a symbol of good fortune, and prosperity. However, if there was an exceptionally full bloom, it was taken as a sign of coming misfortune or disaster, whether in the form of typhoon, drought, or famine. The deigo features prominently in the popular song Shima Uta by The Boom, and the opening lines, deigo no hana ga saki, kaze wo yobi, arashi ga kita ("the deigo flowers bloomed, they called the wind, a storm came") are a reference to this traditional folk belief regarding the deigo flowers, with the song as a whole alluding, or referring, to the Battle of Okinawa, frequently called the "Typhoon of Steel." It is said that the spring of 1945 saw one of the fullest blooms in living memory, just before the beginning of the three-month conflict which would devastate the island.