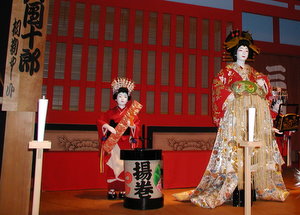 Mannequins of the courtesan Agemaki and her kamuro (child attendant) from the kabuki play Sukeroku.

Courtesans of Edo period Japan, known by a variety of Japanese terms including yûjo and jorô, were more than simple prostitutes. They were experts in dance, music, conversation, and other entertainments, and those who operated within the licensed quarters, such as the Yoshiwara in Edo, Shimabara in Kyoto, Shinmachi in Osaka, Maruyama in Nagasaki, and in Furuichi near Ise, had a complex system of ranks, etiquette, and procedures. At the time of the Yoshiwara's cultural height, prior to 1750 or so, only the most tsû, that is, those with the greatest cultural capital, could secure an appointment with the top courtesans; even then, few could afford it, as the prices for a night with even a middling-ranking courtesan were quite expensive, serving as the source of income not only for the courtesan one was hiring, but for her entire entourage (i.e. attendants, younger courtesans-in-training) as well.

Guides called hyôbanki were regularly published, usually on the occasion of the new year, containing rankings and critiques of the courtesans of a given district for the previous year.

Ranks in the Yoshiwara

The Kyôhô Famine, which began in 1732, had a profound effect on a myriad aspects of Japanese society; this, combined with a variety of other developments, led to the decline of the tayû, and of the complex rituals and procedures of the earlier period of the Yoshiwara. The 1750s-1760s then saw the rise of a new system and hierarchy centered around the oiran, members of the top three ranks in a new hierarchy, who developed out of the position of teahouse waitresses called sancha.