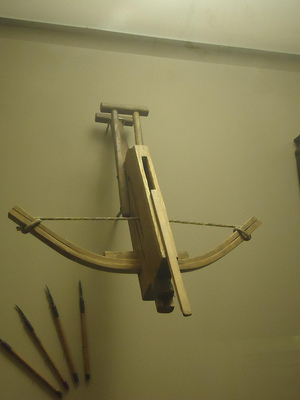 A recreation of an ancient Chinese crossbow, on display at the American Museum of Natural History in New York

The crossbow is believed to have been first invented in China around the 5th century BCE. In legend, its invention is credited to the Yellow Emperor. Though widely used in China throughout the ancient and pre-modern period, and spread to many cultures further west including eventually the Roman Empire (by the 1st century CE), the crossbow never gained much currency in Japan.

Though adopted by the Yamato court in the Asuka and Nara periods, alongside other aspects of Chinese military methods, by the Heian period it was no longer a prominent element of Japanese martial modes.