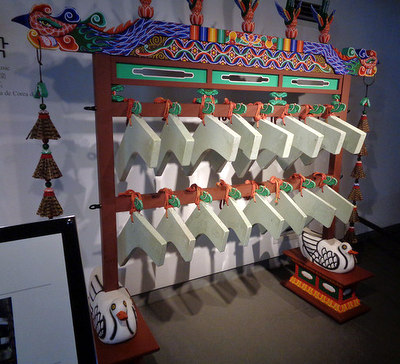 A Korean pyeongyeong on display at the Story of King Sejong gallery, Seoul

The biānqìng is an ancient Chinese musical instrument comprised of a series of stone slabs hung from a frame. Each stone is of a different thickness, and thus produces a different pitch or tone when struck. Such instruments have been found in archaeological sites dating as early as the 430s BCE (see Tomb of Marquis Yi of Zeng).

The instrument eventually fell out of use in China, but was adopted into Korea in 1116, and a version of the instrument, known as pyeongyeong in Korean, became a standard element of Korean court music. The pyeongyeong typically has twelve rhythms and four ranges. The instrument was simplified and improved by scholar-official Park Yeon in the 15th century.