For much of the pre-modern period, the Chinese economy ran on a combination of silver and copper coins. Coins were minted in China since at least the 6th century BCE, originally in bronze in a variety of knife-like and spade-like shapes in different regions or states,[1] acquiring a standard form of a circular coin with a square hole in the center from the Qin Dynasty onwards. The first emperor of Qin banned all regional variant currencies other than the banliang (half-tael), making that coin the standard of the realm; from that time forward, round coins with square holes in the center remained the standard for roughly 2000 years, until the modern period.[1] Though there was a unified standard of bronze coins up until the Song Dynasty (960-1279), the economy grew so large at that time, and demand for coin grew so great, that China shifted to multiple concurrent systems, using bronze/copper coins alongside unminted silver and paper money ("flying cash"), which was first developed and circulated in the early 11th century.

Silver was used for large purchases, while copper was used for smaller purchases. The Chinese government minted massive numbers of coins, especially in the Song Dynasty, in such large amounts (several hundred billion coins over the course of the dynasty)[2] that they came to be widely used throughout the region, and survive in great numbers today, going back even as far as the Han Dynasty. 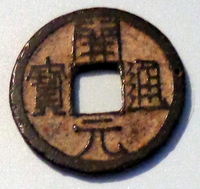 An example of a kaiyuan tongbao coin, such as were first issued in 621

The standard unit of currency was the qián (銭, "cash"), referring to a single copper coin. These coins, roughly one inch in diameter, were minted by the central government in one of a small number of regional mints, and were imprinted with the name of the reigning emperor. As these had a very low monetary value, it quickly became common to carry cash in strings of roughly 1000 coins known as chuàn (串). As a whole string would be accepted by merchants without painstakingly counting the coins or weighing them individually, this allowed consumers and merchants alike to overlook issues of coins which were of uneven weight, e.g. those worn down over time. Though the currency system was in theory based on the weight (and therefore net value) of the precious metals, through the spread and acceptance of these strings, it became de facto a system of fiat money - valued not by weight but by nominal monetary value of a given number of coins.

Since counting and stringing together coins was a time-consuming task, money handlers known as qiánpù (錢鋪) emerged, and sold the service of stringing together one's coins for them. Coins were grouped into strings of 100, ten of which would then be strung together to form a chuàn of 1000 coins. The money handler would often take their fee directly out of the strings, however. Most strings in circulation were thus not truly of 1000 coins, but rather of 990; however, these would still be accepted as strings of 1000, since the money handlers' practice was well-known and accepted. 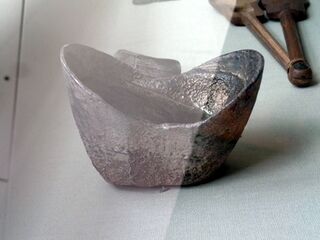 Silver was typically carried in one-ounce ingots known as taels, or liǎng in Chinese, which were not officially minted, and which were valued by weight, and not by fiat or nominal value. Though these were not standardized across the realm, and indeed the standard weights themselves were not standard from place to place, only certain shapes or forms for the ingots were widely produced or accepted. One of the most common was an ingot of 50 liǎng, sometimes known by Europeans as the "shoe of sycee," for its shape which somewhat resembled a shoe (or perhaps a boat, or hat). This term derives from the Chinese xìsī (細絲, Cantonese: saisi), literally meaning "fine silk," but used to refer to these shoe-shaped ingots. Though other shapes and forms circulated within China, ingots minted abroad were typically not used in their current state, but were instead melted down and re-formed into more typical Chinese forms by private Chinese money handlers, who would then imprint onto the ingot its weight and purity.

From the 16th century onwards, Spanish silver dollars ("pieces of eight") began to circulate, especially in and around Guangzhou. As these were of a very standard weight and fineness, by the 19th century they were widely circulating as-is, rather than being melted down, especially in southern China. 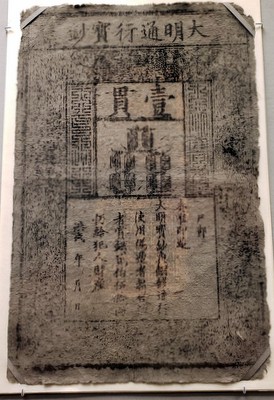 Paper money was produced as early as the beginning of the 11th century, and though initially produced independently by Sichuan province merchants, the production of paper money (交子, jiaozi) was taken over by the court in 1024. It continued to circulate chiefly in Sichuan until the Southern Song Dynasty, when it became more standard. In 1161, the Southern Song court issued a new type of paper money, called huizi 會子, for circulation in the Jiangnan region around Suzhou and Hangzhou. Backed by silver by the court, the huizi were originally intended as a temporary measure, but by 1170 became a permanent feature of the economic landscape. The huizi originally issued expired after three years, with the intention that people would exchange them with government offices for new issues; this discouraged saving, and encouraged the use of the bills only as a mode of exchange. However, by the 1230s, prices came increasingly to be marked in amounts of huizi, rather than in coin, and after 1240, the court ceased placing an expiration on the value of the bills. By this time, paper and silver had become the standard modes of exchange, and bronze coins fell nearly out of use, comprising less than two percent of the currency disbursed in redemption of old huizi. Still, these huizi notes remained in use chiefly in the Jiangnan region, while three other sets of currency became or remained standard in other regions, respectively.[3]

Paper money continued to be in wide use until the 15th century, when the Court discontinued its production. From then until the early 20th century (with a few exceptions), paper money was not governmentally produced. However, in the 18th-19th centuries, private merchants widely used various forms of paper credit, or paper receipts for gold or silver, a system not entirely dissimilar to that employed by rice brokers in Japan. Though initially functioning merely as representative of actual gold or silver in the bank, for which such a receipt or note could be exchanged, this paper money quickly came to be given and accepted as representative of value in and of itself; with people less frequently trading in their notes for precious metals, money handlers found they could issue notes and not necessarily have to hold onto the full amount of gold or silver in their store. In the 19th century, as much as one-third of money in circulation might have been paper money. Counterfeiting and the like sometimes led to runs on the banks, however, which would then lead to banks going bankrupt, as they were not holding enough gold or silver to pay out to everyone who wished to trade in a note.