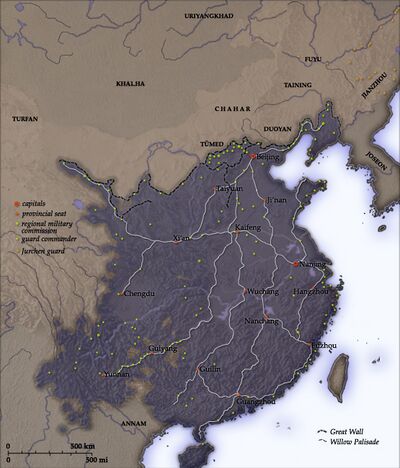 A map of the extent of Chinese territory in the late Ming Dynasty (c. late 16th to early 17th centuries)

"China proper" is a term which refers to the core area of China controlled by the majority of China's historical dynasties.

Up until the 6th century CE or so, the term Zhongguo ("Central Country" or "Middle Kingdom"), one of the most standard terms used throughout history to refer to China, referred specifically to the lower alluvial plain of the Yellow River, an area also known as the "Central Plain." At that time, peoples outside of that region - including a great many people & regions which are very much considered "Chinese" today - were seen as "barbarians" or "outsiders," and were referred to using the term siyi (四夷, "barbarians of the four directions").[1]

The precise borders of "China proper" are undefined, as the various Chinese states waxed and waned over the centuries, but most key is that "China proper" excludes areas such as Tibet, Xinjiang, Inner Mongolia, Manchuria, and Taiwan which were not historically controlled or dominantly inhabited by Han people until the 17th-19th centuries.