From SamuraiWiki
(Redirected from Ashikaga Bakufu)
Jump to navigationJump to search 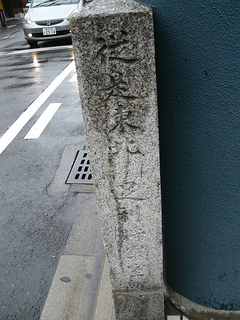 Stele marking the southwestern corner of the former site of the chief governmental offices of the Muromachi bakufu at Muromachi-Imadegawa.

The Muromachi shogunate, ruled by members of the Ashikaga clan, was the second of Japan's three shogunates. Based in the Muromachi district of Kyoto, it was stronger than the preceding Kamakura shogunate, wielding more direct power over more of the archipelago, but was still considerably weaker than the Tokugawa shogunate which would follow.

The Ashikaga were descended from Minamoto no Yoshiie, whose son Yoshikuni settled in the Ashikaga district of Shimotsuke province. Yoshikuni's first son took the name Nitta while his second took Ashikaga. The Ashikaga became very wealthy under the Hôjô Regents and their defection to the Imperial cause in 1333 sealed the Hôjô's fate. Ashikaga Takauji then turned against Emperor Go-Daigo and in 1336 was named the first Ashikaga shôgun.

The shogunate's bureaucracy was divided into four offices - one more than the Kamakura shogunate. These included an office overseeing police and military matters, one for financial affairs, one for judicial affairs, and one which maintained records, especially records related to land and taxation. The Ashikaga appointed shugo, or military governors, to govern the provinces. His most trusted vassals were granted positions within the bureaucracy, and simultaneously held shugo positions in the areas immediately surrounding Kyoto. All the shugo throughout the archipelago were nominally vassals of the shogun, but enjoyed considerable autonomy, and would eventually (beginning around the time of the Ônin War in 1467-1477) transform into the Sengoku daimyo, claiming supreme local authority in their respective territories.

Not only the Ashikaga, but their top vassals, and their retainers in turn, maintained homes in Kyoto at this time; it has been estimated that as many as 10,000 mounted warriors lived in the city in the 14th century (plus, some significant number of samurai retainers too low-ranking to own a horse).[1]

The Ashikaga were seriously weakened after the Ônin War (1467-77) and eventually eclipsed by Oda Nobunaga in 1573, who banished the last Ashikaga shôgun, Ashikaga Yoshiaki, from Kyoto.