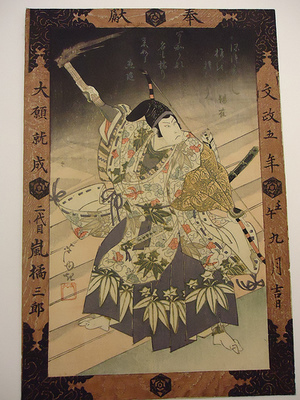 Rikan II in a woodblock print from 1822.

Arashi Rikan II was a Kamigata kabuki actor who enjoyed extreme popularity in his time.

Like most kabuki actors, and many artists, of his time, Rikan had a number of names. He was the second to be called Arashi Rikan. His yagô was Itamiya. Other names he used on stage include Arashi Kitsusaburô II, Arashi Jusaburô I, and Arashi Tokusaburô II. In poetry circles, he was known by the poetry names Rikaku and Gyokusan. Rikan was also known by the nickname "Metoku" or "Metoku Rikan", meaning something like "eyes of virtue," and referring to his famously large eyes.

Rikan was a native of Osaka. He studied under Arashi Isaburô I, and made his first appearance on stage in 1800, at Osaka's Takeda no Shibai, under the name Arashi Tokusaburô II. He took the name Arashi Rikan in 1828, after briefly passing through a number of other stage-names.

Unlike most prominent kabuki actors, Rikan was not related by blood to other actors; he was neither the son of a kabuki actor, nor did he have any biological sons who followed him.

He performed at minor theatres called hama shibai for the first twenty years of his career, then moved up to major theatres for the first time, doing a tour in Edo (performing mainly at the Nakamura-za) in 1820-1822. In 1822/11, he returned to Osaka, took the name Kitsusaburô II (Arashi Kitsusaburo I, also known as Arashi Rikan I, died during the Edo tour), and participated in a special performance of Yorimasa Nue Monogatari on the first anniversary of Rikan's death.

Kitsusaburô led a tour in Nagoya in 1828, returning to Osaka and taking the name Arashi Rikan II at the Kado no Shibai in the 8th month, on the 7th anniversary of the death of Rikan I.

He fell ill during a performance in 1836 and had to be replaced onstage by Arashi Rikaku II. Rikan recovered, but fell ill again the following year. His final performance was in 1837/5, at the Ônishi no shibai. He died the following month, and is buried at the temple Jôgen-ji in Osaka.