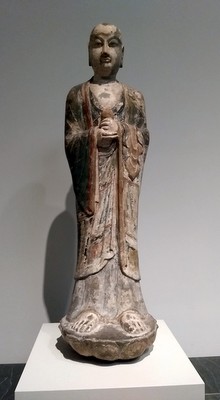 Ananda was a cousin of Shakyamuni, the historical Buddha, and served as one of his chief attendants. He is said to have had an excellent memory, and to have been a champion of women's rights; he is known for his establishment of an order of Buddhist nuns.

Beginning in the 6th century, Ananda came to be frequently depicted alongside Kashyapa as two attendants to the Buddha.