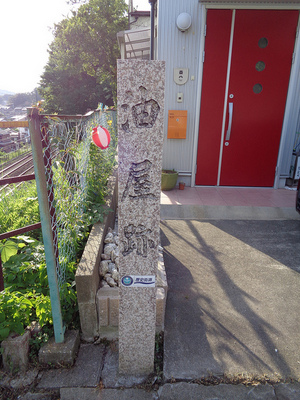 Stone marker at former site of the Aburaya.

The Abura-ya was a brothel in the town of Furuichi (today part of Ise city), located near Ise shrine. It was perhaps the most prominent teahouse in the district, which also included teahouses such as the Sugimoto-ya, Bizen-ya, and Senzoku-ya, and was located immediately next to a temple, Dairinji.

The Abura-ya is most famous for an incident which occurred there on 1796/5/4, when a local doctor, Magofuku Itsuki (age 27), spurred by jealously, went on a murderous rampage in the teahouse, killing three and seriously injuring six. He committed suicide two days later at the house of his uncle, a low-ranking Ise shrine priest. His lover, the courtesan Okon (age 16 at the time), lived until the age of 49, when she succumbed to an illness, and was buried alongside Itsuki in a "lover's grave" at Dairin-ji.

The incident inspired a kabuki play, Ise Ondo Koi no Netaba, which debuted at the Kado no Shibai in Osaka just two months later.

Nothing remains of the Aburaya today except for a stone monument marking the location. A Chinese restaurant stands on the site today.