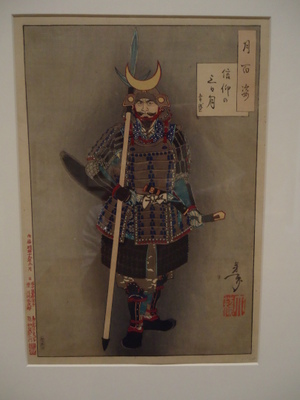 Yamanaka Shikanosuke Yukimori in an ukiyo-e print by Tsukioka Yoshitoshi

The Yamanaka were retainers of the Amako who had assisted the Amako in regaining Gassan-Toda castle in 1486. Yukimori was the second son of Yamanaka Mikawa no Kami Mitsuyuki (1519?-1546). His mother issued from the Tachihara family. A natural fighter who had taken his first head at the age of 13, Yamanaka had been born during the harvest moon and even prior to the events of 1566 allegedly thought of himself as a child of the moon. By 1563, Môri Motonari had penetrated the borders of Izumo and was besieging the strategically vital Shiraga castle. Yukimori was dispatched in relief with 200 horsemen and while he failed to lift the siege, he did distinguish himself for bravery. Further displays of his martial abilities would come in 1565, when the Mori surrounded Gassan-Toda, the Amako's headquarters. During the siege, Yamanaka's talents became well known even among the Mori, and a certain Shinagawa Daisen challenged him to a one-on-one duel. Such a request was actually quite unusual by this time, and both opposing daimyo agreed, perhaps in the hopes of encouraging their respective armies. The site chosen for the fight was an island of land in the middle of the Toda River, which ran past the Amako stronghold. At this point it should be mentioned that the 'shika' in Yamanaka's honorific title, 'Shikanosuke', can be read as deer, and Yamanaka accordingly wore a helmet adorned with deer horns. Prior to their duel, Shinagawa poked fun at him by changing his own name to Taraki Okaminosuke, which essentially meant that when Yamanaka (the deer/shika) had his horns down (while eating the tara plant), Shinagawa (the wolf) would kill him. In the event, Shikanosuke proved the better warrior. Under the attentive gaze of both armies, Yamanaka grappled with his foe and killed him with a knife. Cutting his head off, he shouted, "The deer has killed the wolf!"

Yamanaka's display of skill was not enough to save Gassan-Toda, which surrendered the following year. Yoshihisa was sent into exile and the Amako lands absorbed by the Mori. For Yamanaka, however, the war wasn't over yet. Determined to fight on to restore the Amako, he made a famous vow before the new moon, declaring that he would gladly accept all of the 'seven troubles and eight pains' if it would bring relief to the Amako.

To this end, Yamanaka managed to convince Amako Katsuhisa (d.1578), Amako Haruhisa's first cousin, to abandon his monkish habit and return to lay life. Together, the two men spent some years engaged in minor harassing operations against the Mori. Izumo was presently under the control of Kikkawa Motoharu (one of the by-now late Motonari's sons) and it was with this talented general that Yamanaka butted heads with.

In 1577 Oda Nobunaga began a campaign against the Mori, presenting what seemed a golden opportunity for Katsuhisa and Yamanaka. In 1578 the two managed to secure the somewhat disinterested support of Nobunaga and were allowed to join Hashiba [Toyotomi] Hideyoshi's campaign in Harima. Around the same time Hideyoshi captured Kozuki castle from the Bessho and almost immediately lost it to the Ukita (allies of the Mori). Yamanaka was incorporated into the effort to retake Kozuki, and helped defeat Ukita Naoie when he came from Bizen in relief. Once Kozuki was securely in Oda hands, Hideyoshi turned it over to the Amako.

Unfortunately, a Mori army of 30,000 had just arrived from the western provinces, and this drew up around Kozuki, no doubt tempted both by Kozuki's strategic situation and the presence of Amako. Hideyoshi was presently involved with the siege of Miki castle but dispatched part of his army in relief, an operation he immediately curtailed when Nobunaga sent word to abandon Kozuki to its fate.

Vastly outnumbered and forsaken by their allies, the Amako gave in. Katsuhisa committed suicide but Yamanaka was taken alive and was offered the grant of a small fief in the far-western provinces. Yamanaka actually accepted the fief but his old enemy Kikkawa Motoharu was taking no chances and arranged for his murder at Takahashi in Bitchû province. His head was put on display for a time in the Inland Sea port town of Tomonoura.[1]

A brave warrior renowned for his skill in arms, Yamanaka is sometimes seen as a 16th Century Kusunoki Masashige in terms of his qualities of loyalty and devotion. His surrender at Kozuki tarnished his legacy slightly, but takes little away from the story of the 'samurai of the crescent moon".