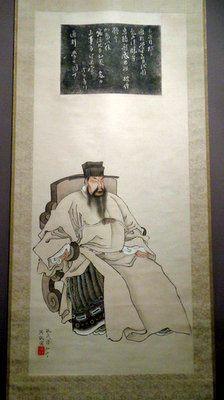 Yue Fei was a general in service to the Southern Song Dynasty, who was executed by the court, and later posthumously raised up as a paragon of Confucian virtue.

At a time when the Song was attempting to negotiate with the Jurchen Jin dynasty, Yue Fei was determined to only oppose the Jurchens, who he saw as barbarians, and to seek to drive them out of China by force. As this was an obstacle to the negotiations, the court arranged to have Yue Fei assassinated.

Generations later, Yue Fei came to be seen as a patriot, hero, and paragon of Confucian virtue, for his steadfast determination to defend China from barbarianism.