From SamuraiWiki
(Redirected from Yogakusho)
Jump to navigationJump to search 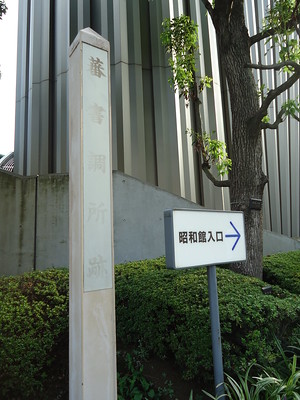 Originally established in 1855 as the Yôgakusho (roughly, "Western Studies Institute") on the former site of a firefighters' station in Ogawamachi, in the Kanda neighborhood of Edo, the institute was moved in 1855/12 to the former site of the residence of Nakaoku koshô Takemoto Zusho no kami Masatsune, at Kudanzaka.

Scholars such as Koga Kin'ichirô and Mitsukuri Genpo were appointed to prominent positions in the school. Not only shogunate retainers but also retainers of the various domains were permitted to study at the institute.[1]

That same year, all Western books in the shogunate's collections were relocated to the Bansho shirabesho to be kept there. The various daimyô houses were then ordered to submit lists of the Western books in their collections, along with copies of translations that had been produced. The shogunate also ordered that all newly-published Western books and translations had to pass through inspectors (or censors) at the Bansho shirabesho.[2] A painting or illustration section was also established within the institute; a number of Meiji period Japanese painters in the Western-style studied there.[1]

The Bansho shirabesho was later relocated to Kanda Hitotsubashi-dôri avenue, and was renamed the Yôsho shirabesho ("Institute for the Examination of Western Books") and then the Kaiseisho. The law, literature, and physical sciences departments of the University of Tokyo are considered to have developed out of the Institute.[1]

An explanatory plaque marking the former location of the institute stands today just outside Kudanshita subway station, near the Shôwakan museum/archives.[1]