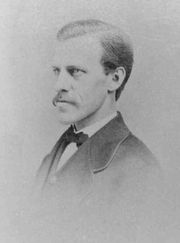 The Rev. Dr. William Elliot Griffis, author of "The Mikado's Empire" and other books, was born in the city of Philadelphia in 1843. His taste for travel and adventure was inherited from six generations of Devonshire, England, seamen and navigators. Griffis' father was a coal merchant in Philadelphia during the later portion of his life. After taking a course in the public schools Griffis entered Philadelphia High School. When twenty-two he became a student at Rutger's College, and graduated in the class of 1869 with the degree of A.B. Later he was made an A.M. by his alma mater, and received the degree of D.D. from Union College, and Rutgers made him an L.H.D. in 1899.

In 1869 he visited Europe with the intention of taking a course in theology in the German universities, but his love for travel led him to decide that the best use he could make of his time was to see as much of the Old World as extensively as possible, which he did. Upon his return he took a course in the Theological Seminary of the Reformed Dutch Church at New Brunswick.

About that time 1867 Japanese students were flocking to the United States, and Dr. Griffis became much interested in their condition and formed many personal acquaintances with these young men. He wrote an article about that time in the New York "Independent," which attracted considerable attention. In 1870 there came an application from Japan for young men to teach physical science in that country, and daimyô Matsudaira Echizen no Kami Shungaku invited him, during that year, to enter upon the work. He accepted the call, and organized a school on the American model at Fukui, and for a year lived alone in Japan, witnessing sights seen previously by only a very few other Americans. He may have been the only man of European descent who lived at a daimyô's court and saw the old feudal system in operation. He helped to organize the school in Echizen province, and many of his students later became prominent officers in the Japanese government. He journeyed frequently into the regions of central and northern Japan and inspected their mines, gun factories, oil wells, silk-reeling apparatus, etc. When the han were abolished, most of his students left for the capital.

Having proposed to the Minister of Education, Oki Takato, in Tokyo, that a polytechnic school be established, Dr. Griffis was invited to undertake the work, and the plan was later Tokyo Imperial University, where he remained three years. Here he also saw much of Japanese life, and had an audience with the Meiji Emperor and became acquainted with most of the members of the Cabinet Ôkubo Toshimichi, Kido Takayoshi, Ôkuma Shigenobu, and others who led the great national movement which swung Japan from its ancient civilization into modern progress. For two years his oldest sister was with him, so that at their household the daughters as well as the sons of the prominent Japanese were entertained. Regarded as a learned man and made a member of their societies, he was able to come into contact with all classes of people, and traveled extensively in different portions of the country. His library at Ithaca contained many rare books published in the Japanese language, and he probably had the finest collection of general works upon Japan in the United States at that time.

He returned to America in 1874, and for five years continued the study of the language and literature of that country. The first two years of that period were spent in writing and lecturing throughout the United States. The first edition of "The Mikado's Empire" came out in August, 1876. From this time until the Shimonoseki indemnity was returned to Japan copies of the chapter on "The Shimonoseki Affair" in the United States were sent to members of Congress, and Mr. Griffis agitated the subject in his lectures for years.

Although his masterwork, "The Mikado's Empire" is his best known book, Dr. Griffis wrote four other notable books about Japan. These are "Fairy Tales of Old Japan", "Verbeck of Japan," "A Maker of the New Orient," being a life of S. R. Brown; and a story, "In the Mikado's Service."