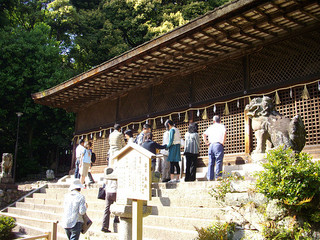 The honden of Ujigami Shrine, believed to be the oldest extant example of Shinto shrine architecture in the world.

A partner shrine along with nearby Uji Shrine, Ujigami Shrine is counted as part of the UNESCO World Heritage Site entitled "Historic Monuments of Ancient Kyoto (Kyoto, Uji and Otsu Cities)".

Though the actual origins of the shrine (and the date of its establishment) are not fully known, a recent study determined that elements of the shrine - particularly the honden - dated back to 1060 and represent the oldest extant examples of Shinto shrine architecture in Japan (and thus in the world). The study also revealed a strong connection to the Byôdô-in, which was built in 1052. While the Byôdô-in, and a great many other shrines throughout the country, may have been built earlier, and have survived, they survive as the product of rebuilding, repair, renovation and reconstruction. Apparently, some significant elements of Ujigami Shrine, by contrast, are not reconstructions, but are original.

A National Treasure, the haiden of Ujigami Shrine dates to the early Kamakura period. It is said to have been moved here from Uji Rikyû (Uji Detached Imperial Palace) and to be a fine example of the shinden-zukuri architectural style.