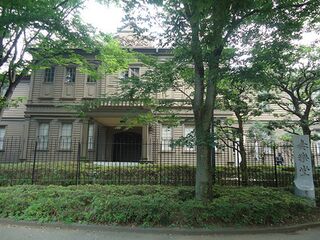 The Symphony Hall of the Tokyo Music School

The Tokyo Music School was the first music school officially sponsored by the Meiji government.

It started out in 1879 as the Music Study Committee (Ongaku torishirabe-gakari), and later developed into a full school, the Tôkyô ongaku gakkô. The Symphony Hall (sôgakudô) was built in 1890 to serve as the main building of the school; designed by Yamaguchi Hanroku and Kuru Masamichi, it was the full-scale modern/Western-style music hall in the country.

The school was later absorbed into the Tokyo University of the Arts (Geidai). The Symphony Hall (sôgakudô) fell into disrepair, but was restored in 1987, and has been designated an Important Cultural Property. The restoration efforts included the repair of Japan's only pneumatic pipe organ.