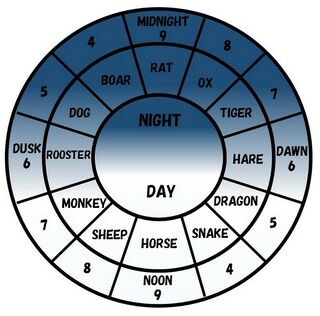 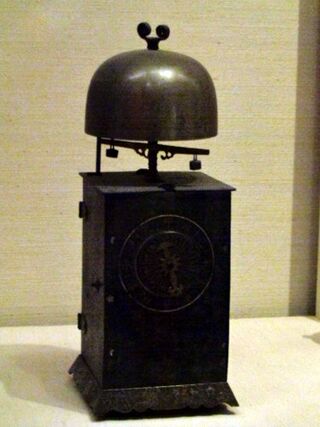 A 17th century Japanese-made clock based on European technology

In Edo period Japan, the day was divided into six koku (刻), and the night another six koku, for a total of 12 koku corresponding to each full day-night cycle.[1] Each koku was thus roughly equivalent to two hours of the modern 24-hour day, though they grew longer and shorter as the length of the day shifted with the seasons. In winter, when days were shorter (and nights longer), the daytime (昼) koku were shorter, and the nighttime (夜) koku longer. In summer, the reverse was the case. The "hour" was announced within cities by a series of belltowers; in Edo, a bell in the Hongoku-chô neighborhood, near Nihonbashi, was rung for each "hour," and was then re-announced by a series of eight bells located elsewhere in the city.[2] The bells would be rung nine times at midnight and noon, stepping down to eight bell strokes one "hour" (one koku) later, then seven, then six bell strokes to announce dawn or dusk, followed by five tones, then four, jumping back up to nine as it reached midnight or noon. Diaries and other documents of the time often record the time by the number of bells rung; for example, a given diarist might indicate that an event occurred at 暮六ツ時 (kure mutsu doki, lit. "dusk six [bells] hour") or 六ツ時分 (mutsu jibun, lit. "six [bells] hour"). The sexagenary cycle was also used to keep time, with the koku period of nine bells around midnight being called the Hour of the Rat, and the period of six bells around dawn being called the Hour of the Hare, for example.

Western-style weight-driven mechanical clocks were first introduced to Japan in 1550, when Francis Xavier gave one as a gift to daimyô Ôuchi Yoshitaka. By the beginning of the 17th century, it was not uncommon for daimyô and other elites to possess clocks based on such technology. However, since their mechanisms were designed in Europe to tell regular time, one hour per hour, 24 hours per day, like clockwork (literally), they had to be modified to allow for these seasonal shifts in the length of the “hours” (or koku). Attendants were made to adjust the small weights which drove the clockwork every day, or every few days, to accommodate the days growing longer or shorter. For this reason, as well as the expense and difficulty of getting such clocks reproduced, they remained only a novelty, and were generally owned only by samurai elites. Indeed, the secrets of the technology were kept close for quite some time, and were only published in 1796, in a volume entitled Illustrated Compendium of Mechanical Devices (Karakuri zui, by Hosokawa Yorinao).[3]

It was quite common for people in early modern Japan to rise during the period of seven bells (七つ時), that is, within the last koku before dawn (in our modern conception, the last hour or two before sunrise), to begin to get ready for the day.

A number of other methods were used to tell time, in addition to mechanical clocks and listening for the official bells. Many people likely simply estimated the time of day based on the position of the sun or moon in the sky; it was only in the Meiji period, with the advent of the railroad and certain other developments, that many people's lives began to be organized around tighter timekeeping. Many institutions and individuals used sundials or a variety of types of water clocks. Candles could also be burnt to tell the time, with people keeping track of how far down the candle has burned, or how many candles one has gone through. In the Yoshiwara, a client’s time with a courtesan was measured based on how many incense sticks had been burned, and the client was charged on that basis.

Japan abandoned the traditional 12-hour koku system of timekeeping in 1873, and adopted the Western system, alongside the adoption of the Western calendar.[3]

A very rough illustration of how the periods of the koku lengthened, shortened, and shifted with the seasons. Note the modern 24-hour clock at top and bottom, and the traditional bell (koku) numbers indicated within the day/night bar. In winter, dawn is later and dusk earlier than in summer, squeezing the six koku of daylight into briefer periods each. This illustration is imperfect, but in actuality, daylight would be divided equally into six periods, and night also divided equally.
This article is a rough draft which is in need of cleanup (grammar, spelling, corrections, links, formatting, etc.). You can help SamuraiWiki by editing it. Click here for a list of articles that have been tagged as a draft copy.