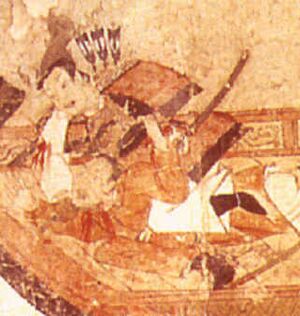 Suenaga cutting the throat of a Mongol Warrior. From the scroll 'Moko Shurai Ekotoba.’

Takezaki Suenaga was a small scale Gokenin (retainer/vassal) of Higo province. He commissioned the scroll Moko Shurai Ekotoba, which was produced in 1293. He Fought at Hakata during the Mongol (Bun'rei) invasion of 1274, under Muto Kagesuke. After the invasion, his deeds had not been reported to the Bakufu, so he sold his horses and saddles in order to finance a trip to Kamakura. This was in order to make a direct appeal for rewards for his service at Hakata (he had lost land in litigation and had become impoverished, and his relatives refused to support him). At first, the Bakufu would not listen, however he told the Bakufu that he was not so much interested in rewards, he just wanted acknowledgement from the Shogun. He stated that this would raise the morale among the warrior class in the case of another invasion. He was acknowledged as a loyal servant to the Bakufu and he was the only warrior of 120 in attendance who received the personal investiture of the Shogun. He was also presented with a prize horse by Adachi Yasumori, the chief the Bakufu's rewards office. He also fought in the second Mongol invasion of 1281, at the forefront of the Higo province army. He was commanded by Adachi Morimune, Son of Adachi Yasumori.