From SamuraiWiki
(Redirected from Takasegawa canal)
Jump to navigationJump to search 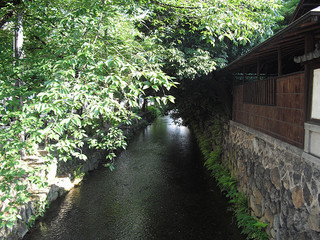 A section of the Takase Canal, near Ichi-no-funairi. 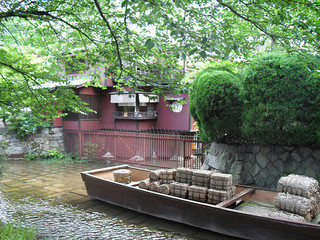 A modern replica of a Takasebune canal boat, tied up at Ichi-no-funairi.

The Takase Canal (misleadingly called Takasegawa, or "Takase River" in Japanese) was constructed in 1608-1611, to connect Kyoto to the port of Fushimi, so that goods could be brought up to the Imperial capital - which has no port of its own, as it is located inland - from Osaka and elsewhere. It runs across a distance of roughly 11 km in total, but is quite shallow, at only about 30 cm deep.[1]

The project cost 75,000 ryô, and was funded entirely by Suminokura Ryôi, one of the most prominent and wealthy Kyoto-based merchants at the time, who enjoyed the favor of both Tokugawa Ieyasu and Toyotomi Hideyori, and who was also prominent in the overseas shuinsen ("red seals ships") trade. Suminokura's residence was located right alongside the canal.

The canal runs roughly parallel to the Kamo River, along a somewhat curved or crooked route, from just south of Nijô-dôri at its northern end, down to Gojô-dôri in the south. Originally, it ran as far south as Jûjô-dôri, then crossed the river and continued down to Fushimi, carrying roughly a hundred Takasebune boats at once.[2]

Along the canal are several funairi, or spots where boats would be "put in." At the first of these (ichi no funairi), a replica boat is today tied up, displaying the kind of boat that would have been used at that time, and what it would have looked like loaded up with casks of Fushimi saké and other such goods.

Today, the canal brings character to Kiyamachi-dôri, making it seem quite classy, historic, and scenic by day, though at night the street becomes a rather declassé, crowded, noisy scene.