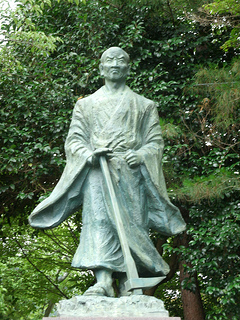 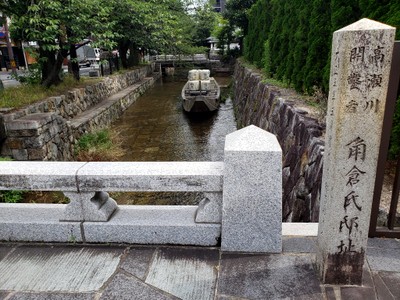 Marker for former site of Suminokura residence at the Takase canal

Suminokura Ryôi was a prominent Kyoto-based merchant of the late Azuchi-Momoyama period and early Edo period. One of the wealthiest merchants in Kyoto, and active in the red seal ships trade with Southeast Asia, he is perhaps most known today for his part in the construction of the Takasegawa canal which still cuts through Kyoto today.

Ryôi was the son of Yoshida Sôkei, a pawnbroker from the town of Saga, near Kyoto, who was also a physician and a merchant involved in the kangô bôeki "tally trade." Ryôi's mother was a daughter of the prominent Nakamura family of Kyoto moneylenders. His grandfather is known to have traveled to China to study medicine, and his earlier ancestors to have been physicians for the Ashikaga shogunate[1][2].

Though he aided his father for a time, ultimately his younger brother Yoshida Sôjun took over the family business as a physician and merchant of medicines; Ryôi took the trade-name (yagô) Suminokura and turned to other trades. He made annual trips to Tonkin (today, northern Vietnam) along with his son Suminokura Soan, beginning in 1603. Not only an active trader, he also helped prepare diplomatic documents for the shogunate, with the help of the likes of Fujiwara Seika and Hayashi Razan (an indication of the kinds of contacts he had and circles he traveled in), and served as a messenger for the shogunate in delivering to and receiving messages from foreign lords, such as the Trinh of Tonkin.[1]

Like other prominent merchants of his time, Ryôi was quite often employed by leaders such as Hideyoshi and Ieyasu for a variety of administrative tasks, or to oversee or put into motion various projects, including public works projects as follows, as well as the expansion of trade and other such efforts. Wealthy merchants such as Ryôi also arranged for the provision of supplies for these powerful leaders, and acted as a representative in major financial transactions (in rice)[3].

Though Kyoto was a major commercial center in the Edo period, as it had been since the Heian period, in the opening years of the 17th century the city's merchants did not have easy access to any ports; the lumber industry likewise had trouble transporting materials to the city. Around 1600, Tokugawa Ieyasu had Ryôi and his son Suminokura Soan organize bands of corvée laborers to clear sections of several rivers,[4] and in 1607, Ryôi oversaw projects which helped make the upper stretches of the Katsuragawa more conducive to the transport of timber and lumber to the Arashiyama area. Two years later, in 1609, he connected the port at Fushimi to the Kamogawa, making the heart of Kyoto's commercial districts accessible by riverboat from Osaka.[5] The Takasegawa canal, begun in 1608 with the permission of Toyotomi Hideyori, was completed in 1611, further improving Kyoto's accessibility by riverboat[4]. Though many of these projects were done at the request of the shogunate, Ryôi enjoyed the privilege of charging fees for use of certain canals or sections of rivers, and for the use of certain warehouses along the routes, adding to his revenues.[2]

After surviving a shipwreck in 1609 on a return trip to Japan, Ryôi turned over overseas business to his son, and focused on public works projects and other undertakings. He died in 1614, a few years after the Takasegawa canal was completed, and is buried at the Nison-in in Saga, Kyoto.[2]