From SamuraiWiki
(Redirected from Takagari)
Jump to navigationJump to search 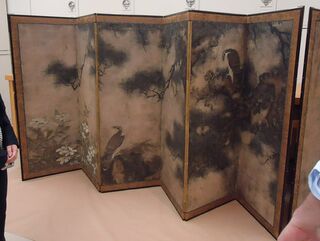 Falconry (lit. "falcon hunting") was a popular pastime among the samurai. Not only an elite and presumably enjoyable pastime in itself, the falcon also came to be associated with the samurai class itself - highly trained and dangerous, but restrained, controlled, and awaiting orders.[1]

Signalling batons called zai (麾), and similar to the saihai used in battle, were used in falconry.[2]

The shogunal falconry grounds were taken out of use in 1721. Falconry was not practiced there after that date, but the lands remained off-limits to commoners.

As a result of the popularity of the practice, and of the martial associations, falcons were a common theme in hanging scroll, fusuma, and byôbu paintings prized by the samurai. A painting of a falcon conveyed that the painting's owner valued both bun and bu - that he was both martial, strong, tough, fierce, and also cultured, with an aesthetic sense and appreciation for paintings. Eagles (J: washi) were a common theme as well, because of a saying that eagles look up to none (ue minu washi), which made eagles therefore an apt association with samurai hierarchy and elitism.[3]

Hunting falcons were also frequently given as gifts between lords and vassals, and were seen as indicative of strong personal ties between them. To name just one example, in 1780, Shimazu Shigehide, lord of Satsuma han, sent a falcon to Shogun Tokugawa Ieharu, as a gift, and then soon afterwards received one from the shogun in return, accompanied by a letter in a personalized tone, expressing that since the shogun heard that Shigehide was fond of falconry, he decided to give this gift. When Shigehide then took this falcon out hunting, he had one of the first cranes he caught salted and sent to the shogun. Such gift exchanges gave daimyô an opportunity to present to their own retainers an image of a strong, close, personal, preferential relationship with the shogun, and also to perform an extension of benevolence and of personal ties by sometimes re-gifting the falcon to cherished retainers. In the case of the Shimazu clan, not only samurai retainers, but also representatives of the Ryûkyû Kingdom were often obliged to present formal congratulations (and gifts) to the lord, in celebration of this occasion of him receiving such a gift from the shogun. Though the practice of exchanging gifts of hawks or cranes was temporarily suspended under Tokugawa Tsunayoshi's Kindness to Animals Decrees, it was resumed under Tokugawa Yoshimune.[4]