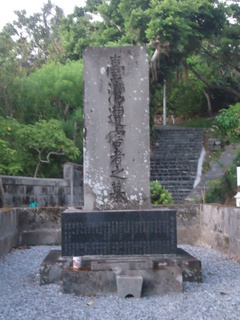 Grave of the victims of the incident, at Gokoku-ji, in Naha.

In late 1871, a ship returning to Miyako Island after paying tribute in Shuri was caught in a typhoon and shipwrecked on the southeastern coast of Taiwan, where many of the Miyako Islanders were killed by Taiwanese aborigines. An international incident ensued, in which China and Japan clashed over control over, and responsibility for, both Taiwan and the Ryûkyûs, eventually leading to the deployment of Japanese troops in Taiwan in 1874, very nearly leading to the outright break out of war between China and Japan, and ending with the Japanese annexation of the Ryûkyûs in 1879.

Of the 69 Miyako Islanders on board the ship, three drowned, and 54 were killed by Taiwanese aborigines. The twelve survivors rescued by the Chinese returned home to Miyako via Fuzhou some months later (within the same year), and King Shô Tai sent his official thanks to the Chinese emperor and authorities for rescuing and returning his subjects.

Yanagihara Sakimitsu, Japanese Diplomatic Minister in China, traveled to Tokyo and related these events roughly six months afterwards. Then, on June 21 1873, he and Foreign Minister Soejima Taneomi met with Chinese authorities in Beijing. The Japanese suggested that if the Qing did not claim to exercise effective control over these aboriginal regions (and thus had no responsibility for the aborigines, and should not be expected to pay reparations), then surely the Qing wouldn't mind if Japan launched an expedition to punish the aborigines for their transgression against Imperial Japanese subjects. Chinese Foreign Minister Mao Changxi responded that though he had heard of the massacre already, those killed were Ryukyuans, and thus Qing vassals, not Japanese subjects.[1]

Various voices, especially from Kagoshima prefecture, pushed for a military expedition to be sent to Taiwan to exact retribution against the aborigines for killing Japanese subjects. US Resident Minister in Japan Charles DeLong and former US consul in Amoy Charles LeGendre assured the Meiji oligarchs that under Western systems of international law, the Chinese had surrendered any claims of sovereignty in those aboriginal regions, and that Taiwan (or at least parts of it) was thus terra nullius and free for the taking.

Tokyo decided to organize a military expedition in February 1874, and the expedition was launched in May of that year. The expedition was largely unsuccessful, with many soldiers dying of tropical disease. The survivors returned, however, with the bodies (or at least the skulls) of many of the original Miyako Islander victims, providing them a proper burial in Wakasa. The burials were later moved in 1898 to the Buddhist temple of Gokoku-ji, where a monument was erected in their memory. The inscription on the monument was written by Governor of Okinawa Prefecture, Narahara Shigeru.