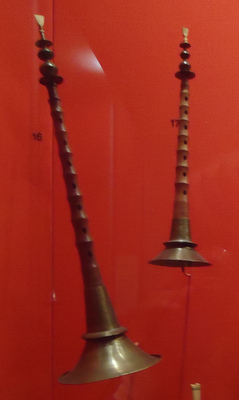 The suǒnà, sometimes known as a shawm in English, is a Chinese double-reed oboe-like instrument derived from the Middle Eastern zurna. Though not generally used in Japanese traditions, street processions performed by Ryukyuan embassies to Edo included suǒnà alongside a number of gongs and drums; the sound of the suǒnà was considered a symbol of the king's authority, and as something which ornamented or added to his presence.[1] The suǒnà was also used in Ryukyuan uzagaku (chamber music) performances, both within the Ryukyuan royal court, and by members of the embassies performing in Shimazu clan mansions or the shogun's castle in Edo.

An 18th century Ryukyuan suona surviving in Tokugawa collections is made primarily of brass and lacquered wood. Seven finger holes on one side of the instrument, and one on the reverse side, are coated on the inside with gold leaf. One more hole allows a tassel to be attached, for decorative purposes, and does not affect the sound of the instrument.[2]

Where the instrument does appear in Japanese contexts, it is often called the charumera, from the Portuguese charamela, which in turn derived from the French term chalumeau.[3]

The suǒnà was first introduced into China in the early 16th century, and comes in a variety of sizes, with smaller ones being called hǎidí (海笛, lit. "ocean flute"). It is played using circular breathing to maintain a constant tone. The suǒnà was primarily used in military contexts in China, traditionally, but is today played either solo or in ensembles.