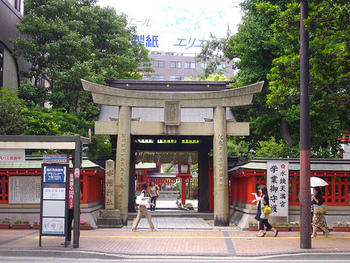 The torii gate marking the main entrance to Suikyô Shrine.

Suikyô shrine is a Shinto shrine dedicated to Tenjin, and located in the Tenjin neighborhood of Fukuoka, which takes its name from the presence of this shrine.

The origin legend of the shrine says that Sugawara no Michizane, the Heian period courtier who would posthumously be named Tenjin, kami of scholarship, stopped on his way to Dazaifu, to where he had been exiled, and looked upon his reflection in the waters of the Shijû River; thus, a Tenjin shrine was later built on that spot.

The shrine was relocated to its current location in 1612 by daimyô Kuroda Nagamasa; his successor, Kuroda Tadayuki, had shrine buildings constructed on the site.