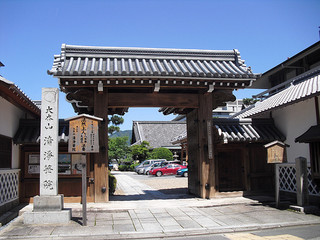 The main gate to the temple.

It was founded by Ennin in 860 on the orders of Emperor Seiwa, to serve as a Buddhist hall for the palace grounds. Construction was completed by 864. Originally a training temple within the palace grounds, the name (roughly, "pure pure flower temple") derives from the idea of aspiring to sit on the Buddha's lotus pedestal.

The temple originally belonged to the Tendai sect, but Emperor Go-Shirakawa asked Hônen to take over and convert the temple to Jôdo-shû (Pure Land Buddhism). After being moved numerous times, the temple came to its current site in 1590.

The Main Hall contains images of Hônen, and Emperors Seiwa and Murakami, along with plaques or markers listing many other emperors. Figures buried in the temple's cemetery include a number of figures related to the Imperial Family, as well as Tateri Munetsugu, Yamashina Tokitsugu, Anenokôji Kintomo, and a number of other famous writers.

The temple also holds an Important Cultural Property known as "Naki Fudô Engi" (Origin of Crying Fudô), and the gravestone of Chima no kata, great-grandmother of the famous Atsuhime.