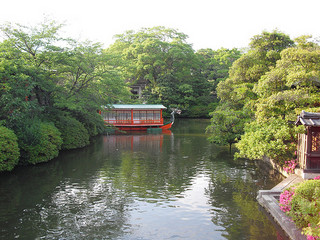 A Heian period style pleasure boat on the pond at Shinsen'en.

Shinsen'en is an Imperial garden in Kyoto which was the site of numerous aristocratic gatherings during the Heian period.

When Emperor Kammu established Heian-kyô (Kyoto) as the imperial capital in 794, a garden was established to the south of the newly constructed Imperial Palace. Since pure water naturally springs up there, it was called Shinsen'en (神泉苑, lit. "Garden of Divine Springs"). A formal visit to the garden in 800/7 by Emperor Kammu marked the beginning of its regular use as an imperial leisure site.[1]

The grounds are four chô from north to south and two chô from east to west. (A chô is a traditional unit of measurement defined today as 109.09 meters, but it may have been a different size in the past.) In addition to the large pond and island in the middle of the garden, there are a number of structures, including a Shinto shrine, a Buddhist temple, a restaurant/inn, and halls ones called Kenrinkaku (乾臨閣 - Tower of Imperial Decisions), Tsuridono (Fishing Palace), and Takidono (Waterfall Palace), among others. A pleasure boat like those used during the Heian period sits on the pond.

The garden has long been a site where Emperors and nobles have come to appreciate the flowers, relax on a boat on the pond, compose poetry, practice archery, have sumô matches, perform business, and hold banquets. The garden was the site of a flower banquet organized in 812 by Emperor Saga which is said to mark the origin of the tradition of hanami.

In the spring of 824, it is said that Kûkai prayed to Zennyô Ryûô for rain, and a miracle occurred. Since then, prominent monks have competed by praying for rain here.

In 863, the garden saw its first goryôe, a ritual or festival held to appease angry spirits, and thus came to be used as a sacred space.

Today, the garden is associated with the major Shingon temple Tôji. Every year, from May 1st to 4th, a Shinsen'en Matsuri (Festival) is held, which includes performances of Shinsen'en kyôgen, based on Mibu kyôgen.