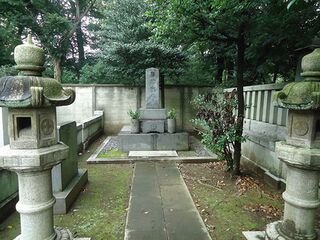 Shimazu Tadatsugu was a member of the House of Lords who also served as head of the Japanese Red Cross and the Tuberculosis Prevention Society.

A grandson of Shimazu Hisamitsu, he was born in Tokyo in 1903, and graduated from the Department of Law at the University of Tokyo in 1930. During the prewar period, while working for the Japanese Red Cross, he traveled on an inspection tour of Europe and the US, and upon his return, introduced the use of the modern ambulance into Japan.

During the war, he played a role in looking after prisoners of war, and in the postwar era, he worked to help bring back Japanese nationals from the former Empire. He served as head of the Japanese Red Cross from 1946 through 1965.

Shimazu was awarded the Grand Cordon of the Order of the Rising Sun, First Class, in 1973. Following his death in 1990, he was buried at Gokoku-ji in Tokyo.