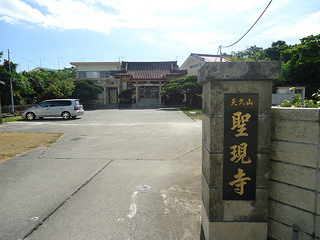 Seigen-ji is a Buddhist temple in the Uenoya neighborhood of Naha which is closely associated with Ameku Shrine, one of the Ryukyu Eight Shrines.

The temple, founded c. 1465-1487, was originally a Rinzai Zen temple, but in 1671 became a branch temple of Gokoku-ji, and a temple of Shingon Buddhism. The chief object of worship is an image of Kannon.

During the Bakumatsu period, due to its proximity to the landing point chosen by most European vessels, Seigen-ji was used as a site for formal meetings between royal representatives and the captains or crews of those ships. A group of Frenchmen stayed at Seigen-ji for four years beginning in 1844, and when the American Commodore Perry arrived in 1853, he established a small coaling station near the temple, along with storage for food and ammunition.

Some 27 Dutchmen, crew of a vessel which was shipwrecked at Miyakojima, were granted lodgings at Seigen-ji for a time in 1857.[1]

The temple was destroyed in the Battle of Okinawa in 1945, but was reconstructed in 1958.