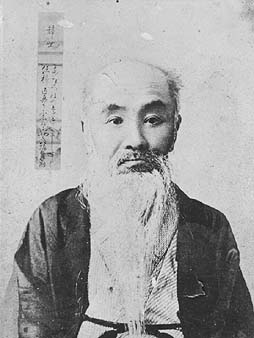 The Saigô family held the post of karô to the Aizu-Matsudaira clan hereditarily, from generation to generation. In 1862, Lord Matsudaira Katamori was appointed the Kyoto Shugo Shoku(Military Commissioner of Kyoto). Saigô Tanomo, who was karô at the time, protested that Lord Katamori should not accept the post, and was dismissed from his karô position in 1863. In 1868, he was allowed to return the position after the Battle of Toba-Fushimi. In April, he entreated Lord Katamori to surrender after being defeated at Shirakawaguchi. Finally he was expelled (escaped?) from Aizu-Wakamatsu castle with his son Kichijûrô and headed to Hakodate. In total, 21 of his family members committed suicide before the Imperial troops entered the city. Following surrender of Hakodate, he was confined until 1872. He worked as a Shintô priest in Nikkô Tôshôgû for awhile. In 1903, he died in Wakamatsu city.

This article is a rough draft which is in need of cleanup (grammar, spelling, corrections, links, formatting, etc.). You can help SamuraiWiki by editing it. Click here for a list of articles that have been tagged as a draft copy.
Retrieved from "http://samurai-archives.com/w/index.php?title=Saigo_Tanomo&oldid=28329"
Categories: