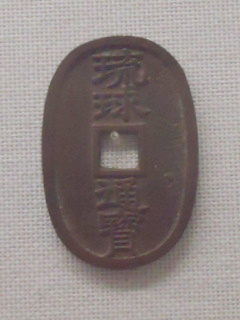 A Ryûkyû tsûhô coin on display at the Tokyo National Museum.

Ryûkyû tsûhô was a coinage produced in Satsuma han beginning in 1862, as part of a scheme by the late Shimazu Nariakira to rebuild his domain's economy. Between 1862 and 1865, one million ryô in Ryûkyû tsûhô coins were minted.[1]

The coins were elliptical in shape, emulating the Tenpô tsûhô coins issued by the Tokugawa shogunate in the 1780s, with each being worth 100 mon. Use of the copper Ryûkyû tsûhô coins was officially limited to Satsuma and Ryûkyû, but in practice did not end up being circulated in Ryûkyû in any significant way. Later, they began to be made more circular, and these ended up circulating into other provinces.