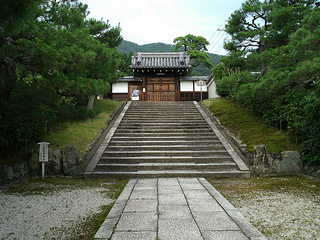 The main gates to Reikan-ji.

Reikan-ji is a Rinzai Zen nunnery in the Shishigatani neighborhood of northeastern Kyoto.

Established in 1654 by Emperor Go-Mizunoo, the temple belongs to the Nanzen-ji branch of Rinzai Zen. Reikan-ji's abbesses came from the Imperial family, and many of the nuns were monzeki (members of aristocratic families who took the tonsure). The temple was originally located a short distance to the south, but moved in 1687 to take over the palace of Retired Emperor Go-Sai, which was offered to the temple. Some of these buildings survive today; most of the rest were built with funding from Shogun Tokugawa Ienari.