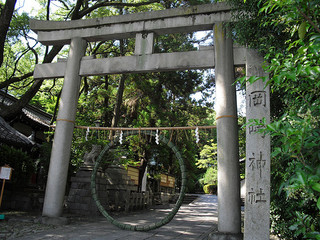 The main torii at Okazaki Shrine

The shrine was founded in 794 during the construction of Heian-kyô, as one of four shrines representing the compass directions. Okazaki represented the east, and was at that time alternatively known as Higashi-tennô (Emperor of the East).